The Ikshavakus & Buddhism in the Valley

The Satavahana administration borrowed its structure from the Mauryas – this meant decentralized power and states that were ruled by feudal lords.  Just as the Satavahanas declared independence when Mauryan rule weakened, their feudatories, the Ikshavakus, took over their dominions in the Krishna basin when the Satavahana dynasty was winding up in the first quarter of the 3rd Century AD. Some historians believe that they were the descendants of THE Ikshavaku kings of Hindu mythology but it is more likely that they just borrowed the name. It must be remembered, however, that the Ikshavakus took over only a fraction of the Satavahana kingdom; many ruling families, including the Pallavas, Vakatakas and Chutus of Karnataka were in possession of different parts of the former kingdom at different times. Only the Vakatakas managed to build a kingdom comparable to that of the Satavahanas in the Deccan.

Vashishtiputra Shantamula (whatey king-level name!) was the first of the four Ikshavaku kings we know of, but we don’t know much else about him except for the fact that he existed, performed a bunch of Yagnams, including the Ashvamedha, and had a few sisters. His son, Virapurushadutta (he one-upped his father in being king-level-ly named), expanded and protected his kingdom through the second-most powerful strategy to do so – matrimony. It was during the reign of the third Ikshavaku,  Ehuvala Shantamula, that the kingdom reached its cultural peak. The Ikshavaku kings, like the Satavahanas, were Hindus but were patrons of Buddhist art and architecture. The women of the dynasty were devout Buddhists and were pretty much wholly responsible for the emergence of Nagarjuna Konda as one of the key Buddhist centers of the time. Shamtamula – II was succeeded by the last known king of the Dynasty, Rudrapurushadutta (you have to hand it to them for naming progeny well). Exactly what caused their decline is unknown; it is probable that the rise of the Pallavas in the 4th century pushed the Ikshavakus back into being vassals. All we know is that within a 100 years of its inception, the dynasty passed into oblivion.

Buddhism by the Rivers

Ashoka is credited with spreading Buddhism far and wide in the sub-continent, and rightly so, but Buddhism may have already been present in the Krishna – Godavari delta by the time he realized he didn’t want all that bloodshed anymore. The earliest mentions of Buddhism in the region can be attributed to Buddhist literature itself – there is mention of the Buddha himself visiting the Stupa at Dharanikota/Amaravati, the former Satavahana capital. The Sutta Nipatta mentions a Brahmin named Bavari who left Kosala t0 live as an ascetic on the banks of the Godavari, in Assaka. According to the text, a curse from a Brahmin prompted him to send 16 of disciples on a cross-country hike to meet famed Buddha, thus bringing back His teachings to the region. Moreover, Ashoka’s inscriptions suggest that Buddhism was already present in the region by the time he issued his edicts.

One suggested reason for the early spread of Buddhism in the region was the similarity between the neolithic and early Buddhist cultures – the Buddhists’ Stupas and the local proto-Andhra population’s megalithic burials, for e.g. Another argument was that caste-less Buddhism appealed to a population on whom caste had been imposed by the invading North Indian rulers. The growth of this faith, however, from its early cult-like existence to mainstream presence in the South can be attributed to the Satavahanas. After the decline of the Mauryas, the Sungas didn’t exactly support Buddhism like their predecessors did (like most things in history, this is debatable) and the religion continued to grow elsewhere. The relative stability of the kingdom, both political and financial, during Satavahana reign and the royal support extended to the religion made Amaravati the most important Buddhist center in the south. For a while.

160 km from present-day Hyderabad, Vijayapuri (“the city of victory”), located strategically by the Krishna River and flanked on either side by the Nallamala hills, was the capital of the Ikshavakus. To its east and north lies a plateau, Sri Parvata and it is as conquerors of this plateau that the Ikshavakus are referred to in the Puranas. While Vijayapuri was the administrative center of the kingdom, Sri Parvata was the spiritual one. Excavation after its discovery in 1926 revealed 27 monasteries and twenty stupas, the largest of which was the Maha Chaitya. The inscriptions on the Stupa tell us that it contains the “holiest relics” – the remains of the Buddha. Inscriptions also tell us that it was renovated in the early 3rd century AD, making it older than the Ikshavaku dynasty. 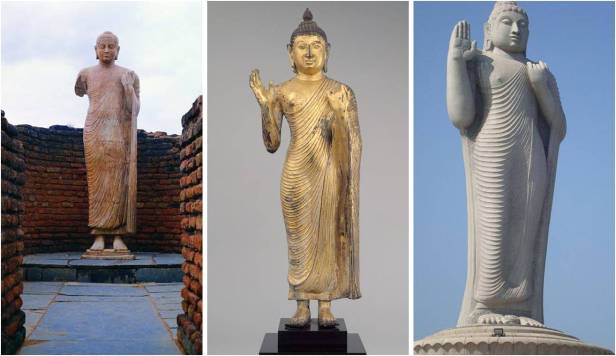 The monasteries, which were actively supported by the royalty (mostly) and the merchant class, are peculiar in their provision of both the Stupa and the image of the Buddha for worship. The Ikshavaku period thus marks the transition from the early symbol-based worship to image-based worship in Buddhism. While the influence of Amaravati is evident, the Ikshavaku period Buddhist art, despite the short timeline, came into its own at Sri Parvata. Stone from Palnadu was used to bring to life stories about the Buddha and tales from the Jataka – the Mandhatu Jataka being an oft-represented favourite. The region became a renowned Buddhist cultural center and attracted people from all over the subcontinent, thus disseminating the Krishna Valley form of Buddhism outside the Valley – the Buddha’s depiction at Sri Parvata, for example, became the standard for representing him in Sri Lanka as well.

After the Ikshavakus passed into oblivion, “Vijayapuri” and “Sri Parvata” followed – the entire region, now known as Nagarjunakonda, named after Acharya Nagarjuna who supposedly lived here, lost it importance. The Chalukyas built a few brick shrines in the valley much later, but its heyday was clearly over. Unfortunately, Nagarjunakonda (“the Hill of Nagarjuna”) is only an island now, thanks to the Nagarjuna Sagar Dam Project; the excavated relics can now be seen at the museum there.

Sukumar Dutt. (1988). Buddhist Monks and Monasteries of India: Their History and Their Contribution to Indian Culture.

What say you? Cancel reply